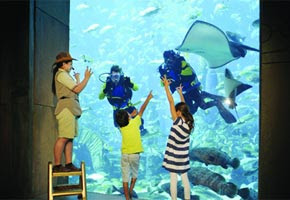 (This is my report in The Gulf Today. Regular posts ASAP. Best wishes to you guys/gals always)
DUBAI: “Do not buy shark products.” That was the stark message from a group of conservationists led by international shark expert Michael Rutzen on Thursday.
Mike “Sharkman” Rutzen, who has spent more time swimming cage-less with great whites than anyone else, was talking to a select group of journalists at Atlantis, The Palm.
He will be a special guest at The Lost Chambers “Family Fun Day” on Friday and on Saturday he will recount his experiences in a speech on “The Great White Shark Carcharodon Carcharias - Behaviour and conservation.”
He will also have a special interactive session with children. “Kids are amazing. Unlike many adults, they keep an open mind and are always ready to learn.”
To a question from The Gulf Today about shark fin soup being cited as a major threat to the species, Rutzen affirmed that it was a “matter of concern.”
“Shark fin soup has become a status symbol in some Asian countries. There are indications that consumption of shark fin can pose health problems to humans too. It is essential to create more awareness on this front,” he said.
A UAE University doctoral candidate, Rima Jabado, who has spent two years cataloguing shark species in the country, highlighted the need to collect more information on sharks.
“We need to do more research and pick up biological information. We have to involve additional people for the task. Presently, I am the only one in the UAE doing research on this specific subject of sharks and hence it is getting difficult,” she said.
Dubai is a major export hub for sharks thanks to its logistical advantages and shipping links with China and Hong Kong. Sharks are sent here for trading purposes from many neighbouring countries.
“Again, we do not have much information on the species that arrive in Dubai from countries like India, Pakistan or Iran. We need to collaborate with fishermen from other countries too and know what is the value or how it is impacting their livelihood,” elaborated Jabado.
According to experts, there are at least ten different species of sharks in the Arabian Gulf. Tiger sharks, which are considered dangerous, rarely come close enough inshore to pose a danger to swimmers. Shark fishing is banned in the UAE during the mating season between January and June.
Praising the UAE for enforcement of strict laws to protect sharks, Steve Kaiser, vice-president of marine sciences at Atlantis, said: “Our aim is to create awareness among the public through activities like our thrilling shark dive in the shark lagoon.”
Steve is responsible for the eco-system of the Ambassador Lagoon, the 11 million litre marine habitat with 65,000 marine animals and The Lost Chambers, a mystical labyrinth of Atlantean ruins with numerous exotic fish and aquatic exhibits.
Sporting a brown shirt dotted with graphics of sharks, the Hawaii-born says he does not often wear suits. “I have 50 to 60 such shirts with fish designs. That is the kind of love I have for fish. It is a pleasure to have an active shark conservationist like Rutzen join the Atlantis team in spreading the important message.”
http://www.gulftoday.ae/portal/0cf9d804-861c-43af-9f8e-90f3200332ea.aspx
Posted by R. Ramesh at 5:47 PM