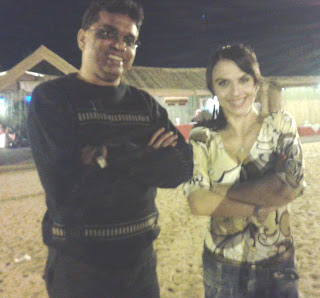 Albeit UAE’s December cold, Natalia Zakrevska was sweating profusely after nearly 20 minutes of twisting and swirling as she danced her way to the heart of an appreciative audience at a Dubai desert camp.
Several Middle Eastern countries claim belly dance as their own and its popularity is widespread around the world. Many desert safaris and dune driving shows for tourists in Dubai also include belly dancing along with music and food.
Natalia, who hails from Ukraine, says her passion for different kinds of Middle Eastern Music and her inherent love for dance brought her to the UAE. She has been a belly dancer in the UAE for the past three years, though she has been living here for around six years. “I think the UAE is the best place for artistes like me as we find appreciation, respect and security here.”
Among the audience are men, women and children of different ages. “As an artiste I exhibit positive energy and expect the same from the audience. When I perform, I get immersed in the art and this helps me bond and connect with people of all ages. There is so much of bliss. In fact, I get tremendous happiness from the cheerful response of the spectators,” she says.
The artiste, in her twenties, used a stick while swaying to the rhythms of loud music and balanced a sword on the curves of her belly, drawing repeated applause.
Natalia says that she wants to start a dance school and train youngsters. “I am skilled in other dance forms too, including Salsa. The UAE has so many varied nationalities. There is absolute unity in diversity here. Hence this is the right place to teach diverse dance forms.”
Will she go to Hollywood or Bollywood if given a chance? “Why not?” she shoots back. “I will grab any such opportunity. I should say I like Bollywood."
Talk about her future plans and Natalia laughs out loud saying, “I want to get married, have kids and settle down.”
Posted by R. Ramesh at 6:25 PM