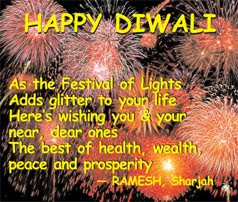 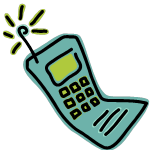 Tired of the daily routine, a friend sat on a park bench, shut his eyes and inhaled deep when another guy grabbed a seat next to him. In seconds, the other man’s cellphone buzzed a romantic tune. Oblivious of someone sitting next to him, the stranger talked loudly for several minutes.
Just yesterday, another friend complained about how a man disturbed an entire prayer session by not stopping the ring tone from buzzing.
When he wrote about this on the FB, the reactions ranged from: “Cell phones should be banned during a prayer session,” and “I cannot understand why people bring it everywhere.” A third person opined: “Someone must have told him about the vibrations!” One comment differed: “If you are in deep prayer or meditation, why should a cellphone sound affect you?”
Are cellphones a pain in the neck?
I would gladly say “yes,” but I cannot dare dump my phone in the sea. After all, she had gifted it to me.
Now, do not ask who she is!
It is definitely not some blog friend. Blog friends have not become so large-hearted yet.
Posted by R. Ramesh at 10:36 AM 19 comments:

What have you done, David! 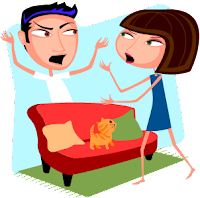 David was happy to see me late in the afternoon.
“You have come to Dubai. You cannot go without visiting home,” he dragged me.
He was preparing tea when the bell rang.
“Hi sweetie,” he hugged her.
It was his wife, returning from school after a hard day’s labour.
“This is RR,” David introduced me.
“Hi,” she said without any interest and turned to David.
“What have you done to the house? I told you to keep it spick and span. You have made a mess.”
“Darlinggg,” he tried to appease her.
“What darling, barling? Don’t touch me David,” she shrugged. “Can’t you see I am sweating all over? There is inspection at school and you know I am going through hell.”
David looked at me like a cat from whose mouth a delicious rat had been snatched.
“You know boss. Teachers have a low pay, high tension job.”
“Ya, my wife is also a teacher,” I consoled him.
By that time, his wife had reached the kitchen.
“Daviddd..,” she yelled.
“Now what?” I murmured.
The milk on the stove had spilled over.
I looked at David sympathetically and took to my heels.
Posted by R. Ramesh at 11:47 AM 26 comments:

Last week I had a chance to visit ‘At.mosphere,' Dubai, recognised as the world's ‘Highest Restaurant from Ground Level" by The Guinness World Records. Kindly allow me to show off. Hey, photo clicked by my dear friend and ace lensman Nisham Manaf. 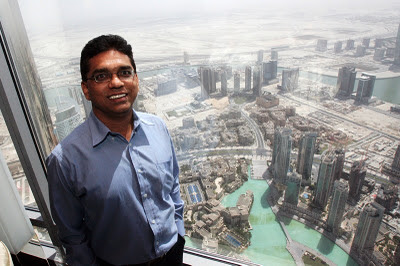 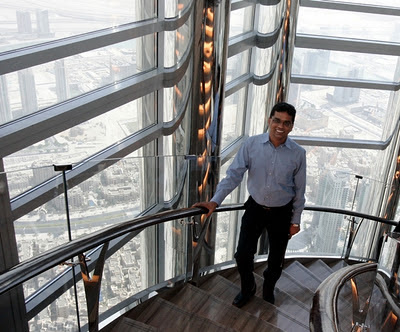 This is an expanded report of a blog post for our magazine Panorama (Oct.7, 2011) Sorry about the length:
Abdul Rehman runs a photo studio in Sharjah. Buoyed by the business boom, he decided to tie the knot. The marital bliss, however, turned out to be brief as he was exposed to a peculiar habit that his wife had developed. If any of her demands were rejected, she would wake up at midnight and create a scene by cutting her wrist or threatening to jump off the window. Rehman's wedlock fast snapped into a deadlock.

Anil Nayar of Dubai recently returned home from office with his brand-new Land Cruiser, all pumped up with joy. Three nights later, his possessive wife deflated his newly-found happiness after learning that he had dropped a female colleague home the same evening. What started as a midnight chat on the subject ended in a fight with the couple not talking to each other for the next three days.
Marriage is a complex subject. Psychologists caution that taking a partner for granted can prove costly for couples, especially in these days of unabashed materialism. With individual ambitions on the rise, so are stress levels. Reports indicate that with more and more couples bickering over trivial matters, household finances have become a burning cause for discord.
Dr Raymond H. Hamden, Clinical & Forensic Psychologist, Human Relations Institute, Dubai, is not surprised. “In fact, rarely do couples fight over big issues. Most of the time, petty matters pile up and lead to a crisis in relations.”
Dr Hamden suggests that couples should learn to balance their lives. “They need to communicate effectively. One should not tell the other ‘my way is the only way.’ There should be a clear interaction without any emotional garbage.”
“Complex couple” is a term in vogue, to define a pair whose relationship has landed in troubled waters for unclear reasons, says psychologist R. Hassan. “The term may be new, but the problem has been prevalent since ages. People have started talking about it more openly these days," he says.
According to the psychologist, irrational expectations from each other, more often than not, lead to trouble brewing in a marriage. The situation can be addressed by both parties talking and spending quality time together, maybe by going on a vacation.
After this has been tried and a solution is not forthcoming, the problem could be intrinsically psychological in nature, over which individuals have little control. In such cases, a visit by either, preferably both, to a counsellor or clinical psychologist could prove beneficial.
In some cases, people fail to realise that they could be suffering from some psychological disorder until matters turn too complicated to handle.
Ashish works in a multinational company. A handsome and cheerful guy, he was naturally disposed to interact with colleagues and friends, especially females. His wife, however, took objection. When the matter came to head, relatives suggested that the couple take a vacation. The attempt though proved futile and the bickering continued.
The entire family was distressed until a well-wisher suggested that the couple visit a clinical psychologist. It was then that the wife was diagnosed as suffering from a “Paranoid Personality Disorder (PPD).
PPD is a condition characterised by excessive distrust and suspicion of others. The disorder is diagnosed only when these behaviours become persistent and reach distressing levels.
It is not always women who are the cause of conflict. There are several instances where chauvinistic men cause a relationship to collapse with their biased attitude.
The result of discord can be varying. There are instances of couples who have been married for long, but not talking to each other. Surprisingly, they may even be having children and stay together only for the sake of the child.
Says Hassan: “All marriages will face marital conflict at varying degrees. Couples should learn how to handle these problems effectively. The impact of modern-day stress can be devastating if couples do not learn to cement a formidable understanding.”
Interestingly, while marriages in the UAE have steadily increased over the past few years thanks to economic progress, the number of divorce cases has also shown a sharp increase.
A report by the National Bureau of Statistics gave no figures for 2010 but according to the state Marriage Fund, divorces remained high through 2010 as economic uncertainty loomed large.
From 13,001 in 2005, total marriages in the UAE rose to 13,190 in 2006 and 13,321 in 2007 before jumping to 15,041 in 2008 to record their highest annual growth rate of 12.9 per cent. Marriages continued to rise in the following year but at a much slower rate of 0.8 per cent to reach 15,175.
The report showed divorces dropped from 3,638 in 2005 to 3,335 in 2006 before surging to 3,761 in 2007. They rose by about 2.5 per cent to 3,855 in 2008 before jumping by 23 per cent to 4,760 in 2009.
The Marriage Fund said that more than a fifth of the marriages involving national spouses in the UAE ended with divorce in 2010, maintaining the countryÕs status as having the highest divorce rate in the region.
“The bottomline,” experts agree, “is that couples should love and trust each other. There should be no comparisons. They should spend enough time together and be lavish in the appreciation of each other.”
(Some of the names have been changed to protect identities).
Posted by R. Ramesh at 9:12 PM 5 comments:

Hey, I like this comment about Steve Jobs post by dear friend Madhulika..so sharing it:
3 apples changed the world..
One that tempted Eve..
Second that fell on Newton..
And third is this Apple ;)

You did great Job, Steve