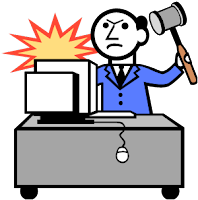 Some people are embarrassingly blunt.
We reached a relative’s house. The thrilled host declared, “How nice! Let me prepare a delicious dish.”
Half-an-hour passed with no sign of her emerging from the kitchen. My hungry little nephew said loudly, “I am hungry.” After one hour, the host appeared with boiling “Upma.” (South Indian snack made of Semolina).
My nephew’s instant reaction: “Yukkk..Upmaaa? So long for this!”
It was Parents Day at a Dubai school. One mom distributed yummy “carrot halwai” to children. A little girl tasted the sweet and instantaneously spit it out with a loud, “yukkk.”
What happened?
“I almost swallowed cardamom,” she replied.
The sweet fun ended in an awkward show as other children started imitating the girl.
"Wall Street Journal" had once mentioned about some dumb people.
A Dell technician received a call from a customer who was very angry that the computer called him "bad and invalid." He had to be told that "bad command" and "invalid" responses should not be taken personally.
One guy complained that “cup holder” on his PC had broken during warranty period. The caller had been using the CD-ROM drive as a cup holder.
Posted by R. Ramesh at 12:31 PM 24 comments:

Appearances can be deceptive 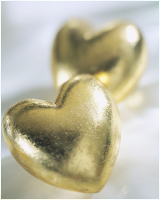 I was walking when I spotted that dark, stout man. He did not have a friendly look. “Beware,” alerted my mind. I moved faster, checking whether my purse and mobile were in my pocket. A few seconds later, I saw him trailing me. I walked faster. He did too. He was almost chasing me now.
“Take the bull by the horns,” said my inner voice.
I turned abruptly.
“Kya chahiye?" (What do you want?)
“Your money fell from your pocket.”
He thrust a 10 dirham note, smiled and walked away, even before I could murmur “Thanks.”
It was stupid of me to judge someone by outward appearance.
It reminded me of the Buddha story.
Some Tibetan monks were informed that a highway was being built and they had to relocate their shrine. A crane was brought to lift the huge clay Buddha. The figurine began to crack. A larger crane was needed, but that would arrive only the next day.
A storm was building at night and water began leaking from the roof. The monks tried to protect the clay Buddha from getting wet, but their attempts failed. It was then that the head priest noticed something strange. Amid the cracking clay, something was shining. The monks chiseled the clay carefully and what appeared stunned them. There stood an amazing gold Buddha.
As they say, there is a golden heart inside every human being (especially those visiting this blog!), covered by layers of clay in the form of ignorance.
Posted by R. Ramesh at 6:22 PM 32 comments:

﻿
﻿I worked with Free Press Journal, Mumbai, in 1983, for a year (Started career). Kumar was my senior there. In one year, I moved to the TOI (17 years) and then to the Gulf. Kumar also moved to the Gulf. We lost touch for 28 years. Recently, our paths crossed virtually when we got in touch over FB. He invited us for dinner to Dubai. The Kumar family’s hospitality was admirable. He has three lovely daughters and a cheerful wife (Masha Allah). What a feel-good factor to get back in touch with good old (I mean young) friends.
Posted by R. Ramesh at 10:57 AM 18 comments:

‘Cruise tourism speeding ahead in UAE’ 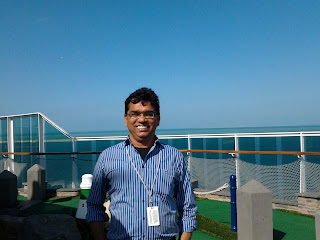 DUBAI: Global recession has not bruised the cruise industry in the UAE and the best indication is a significant increase in guest volumes, according to an expert in the cruise tourism industry.
“The Royal Caribbean Cruises Middle East has witnessed an increase in bookings from the region for its global brands. From January through October 2011, the guest volume from the Middle East (ME) has increased more than 30 per cent compared to the same period last year. The UAE also saw the same growth level during the period,” says Helen Beck, Regional Director for Europe, Middle East and Africa, Royal Caribbean Cruises.
She insists this is a clear signal that the cruise market has moved from ‘niche’ to ‘mainstream’. Helen was speaking to a select group of journalists on board ‘Brilliance of the Seas’ on Sunday.
Asked about the impact the industry will face following the recent ‘Costa Concordia’ ship disaster in Italy which led to loss of lives, Helen echoed the statement of the European Cruise Council which said that “all members operate to the highest safety standards” around the world and “according to international maritime requirements.”
Saying that challenges are not new and the cruise sector always manages to weather the storms, she said, “the sector is turning recession-resilient by adopting various measures, like deployment changes and focus on strengths. I have been in this sector since 2000; and I have seen the business grow and grow.”
“We have been successful once again by achieving overall growth of 56 per cent of guest volume compared to 2010. This growth was achieved by all the nine countries in the Middle East that we represent,” she pointed out.
Cruise tourism is a key growth segment, which will bring great economic benefits to the region, increasing overall expenditure in the tourism sector and boosting the economy.
The Dubai Department of Tourism and Commerce Marketing (DTCM) figures vindicate what Helen cites as a ‘positive indication of growth.’
According to DTCM, cruise tourism saw an annual income of Dhs338 million in 2010 and is estimated to grow to Dhs837 million in 2015. This will see a yield of Dhs3.5 billion into the Dubai economy over those years.
The DTCM has also announced that Dubai closed the year 2011 by receiving a total of 135 cruise ships with 375,000 tourists, while the year 2012 is expected to bring in 150 cruise ships with about 425,000 passengers.
In May this year, Dubai Cruise Terminal was voted Middle East’s leading cruise port for the 4th straight year at the World Travel Awards after about 213,000 industry professionals participated in the voting process.
“We are pleased to see that the interest in cruising in the Middle East is growing year on year,” adds Lakshmi Durai, Executive Director Royal Caribbean International, Celebrity Cruises and Azamara Club Cruises Middle East.
“All markets in the region have contributed well to the success - even countries such as Bahrain and Egypt, which both faced many challenges due to the unrest, showed positive growth compared to last year.”
Durai says: “Approximately 70 per cent of all bookings from the region were made for European cruises. The second most popular destination for cruise travelers from the Middle East was the Caribbean. Being able to showcase our ship ‘Brilliance of the Seas’ - which is sailing in the Gulf now for the third season - to travel agents, media and corporates had a great impact on bookings and further strengthened the positioning of cruising as a holiday option for Middle Eastern guests.”
Asked about latest add-ons, Helen and Lakshmi explained: “To enhance cruising as a holiday option, Royal Caribbean Arabia recently re-launched its website. Through the intuitive navigation structure, all information can be assessed easily on the homepage and the impactful images provide an insight to Royal Caribbean International cruises and its plethora of amenities, entertainment options, food and beverage outlets, range of meeting facilities and celebration ideas.”
Additionally, Royal Caribbean Arabia has developed social media campaigns across platforms including Facebook, Twitter, Youtube and has created a blog so that customers can learn more about cruising, interact with Royal Caribbean Arabia and win exciting prizes through competitions on Facebook. “We have seen a rapid increase in the number of fans on our social media in less than a month through our competitions and posts, which also allows us to receive direct feedback,” Durai explained. 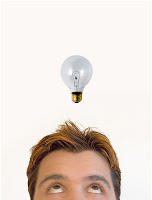 My Pakistani colleague was thrilled when a new Western editor invited him to his birthday party at a posh club in Dubai. My colleague reached the club in a taxi and had a gala time. He also carried a nice gift. When the party was over, the editor cheerfully declared, “Thanks buddies for joining. Let’s go Dutch.” My colleague had to pay for his food. He thanked his stars he did not overindulge.
I have also come across such situations. I did mention to you about the “sexy sanyasin” I wanted to interview for my newspaper in Mumbai. She suggested meeting at a classy coffee house in South Mumbai. She had coffee and snacks and when the bill arrived, used her smile charm.
“Shall I pay?”
“Oh, so nice of you RR.”
Nice of me? Bull. My salary was peanuts those days, as ever.
Talking of misers (hey I am not, ask my true friends), I know of a guy who walked two hours around midnight in Chennai to save taxi fare. Just when he was about to reach home, he realized his pocket had been picked at a roadside tea shop.
I also remember visiting a “maha kanjoos” (king of misers) relative. I entered the restroom and shouted at my wife to switch on the light from outside as I could not see anything. “Stupid, the light is already on,” she answered. I noticed a dim, tiny bulb that was less radiant than a candle. The relative was “saving on electricity bill” this way.
Posted by R. Ramesh at 12:13 PM 29 comments:

Love is blind, marriage is eye-opener 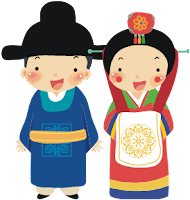 When my handsome nephew rang up to say he liked a girl for marriage, I was happy. “But she is short. I am in a fix,” he added.
I realised my nephew is behind time.
Soon-to-be grooms fail to understand this is a new world. Now, it’s the girls who set terms for marriage. We, boys, used to do that for generations.
I heard a few real stories on these lines:
Some parents of girls make demands from marriage counsellors, like; Can you find a groom for my daughter? But he should not have parents.” “Please tell the groom’s relatives that my daughter will not cook. We do not want hassles later.”
“My daughter is career-focussed. Child should not be a priority.”
I also read an interesting incident. A boy and girl were engaged. The girl casually asked the boy whether he had a cook at home.
“Yes,”
“What happens when the cook takes leave?”
“You,” he said.
“What the heck does your mom do?”
The cheerful conversation ended in cancellation of marriage.
Remembered a silly joke:
Husband to wife: "I love your relatives. I like your mother-in-law better than mine."
Posted by R. Ramesh at 12:42 PM 33 comments: