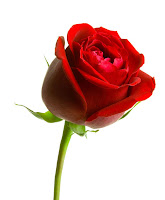 Sending positive vibes and wishes to everyone visiting this blog: Let 2012 bring good health, peace and prosperity to you. Some blog buddies have been of tremendous help, motivating me personally and professionally. Thanks for that. I am sure our bond will strengthen further in the coming years. Stay connected. Love you guys and gals.
Posted by R. Ramesh at 11:40 AM 29 comments:

My dad has several good qualities, but one inappropriate trait I have inherited is loud voice.
A pest-control guy was supposed to reach my home from Dubai. I explained five times on phone how to reach my residence, but he kept asking the route repeatedly.
For the fifth time I asked him, “Do you know Al Khan bridge in Sharjah?”
“Yes.”
“As soon as you get down the bridge, don’t move right or in any other direction. The building is bang opposite the bridge.”
I received the sixth call.
“I have turned right. Now what?”
I told the guy to halt the vehicle wherever he was and walk towards my building.
Then I banged the phone muttering, “What a headache!”
“Ya. For us too, you noisy pest,” joked my colleagues who were disturbed by my yelling on the phone.
Talk of pests and I remembered a joke:
Hoping to teach a lesson to her mother-in-law, a woman put a cockroach on the party dress the lady was about to wear.
The MIL wore the dress, found the cockroach, shook it off and laughed. Her revenge plan was ready: A lizard.
Posted by R. Ramesh at 11:22 AM 20 comments:

The supervisor of an Indian school in Dubai entered a Grade X classroom expecting a serious session.
“Who’s India’s railway minister?” she asked.
“Pratibha Patil,” replied a student.
“That’s the president,” corrected the teacher.
As the class erupted in laughter, another student raised her hands.
“Ma’am, it’s Sonia Gandhi.”
“Enough. Who is the hero of the film Don2?" asked the teacher.
“Shah Rukh Khan,” this time the class replied in chorus.
School life is fun indeed.
A peon saw children making noise and told them, “Go to your seats and sit quiet. Our principal is rounding the school.”
As the children laughed over “rounding,” a boy told the peon, “Do not say rounding. It is wrong English. Say principal is rotating the school.”
I heard more such hilarious incidents.
A science instructor entered a classroom and asked the children, “Did any of you see the English teacher?”
“Ya ma’am,” replied a kid. “She just passed away that side.”
Posted by R. Ramesh at 1:13 PM 22 comments:

Strangely, a court in Russia is about to decide on the Holy text of BhagvadGita. The text has taught me to love everyone irrespective of creed, colour, religion or social status.
Here are just a few points I love in the text:
One who is free from malice towards all beings, friendly and compassionate, forgiving and ever-contented.
One who is free from joy, envy, fear and anxiety.
He who neither rejoices, nor hates, nor grieves, nor desires.
One who is the same to foe and friend as well as honour and dishonour, cold and heat and pleasure and pain, who is free from attachment, to whom censure and praise are equal, who is silent, content with anything.
People with these attributes are dear to God.
Ban?
God, please save us from your followers.
Posted by R. Ramesh at 11:41 AM 15 comments:

I just do not understand what constitutes good looks or beauty.
My wife bought an expensive T-shirt for me. When I went out wearing that, not a single friend reacted.
Last week, I bought a shirt at throwaway price. When I entered office, I was amazed at the reaction from friends. In fact, a colleague clicked a snap on his mobile saying that the shirt looked great.
People go to any extent to look better. Bald friend Bhagat used a lotion to cure baldness, only to be left with acid marks on his head.
Little boy RJ wanted to prove to girls that he was a grown-up boy. “I want to grow a nice, black moustache,” he told us. “Use turmeric paste,” we suggested. The next day, he appeared with his face covered in turmeric. Women use turmeric paste to keep off superfluous hair.
I heard an interesting story. A mother, with her hands and face bearing ugly burns marks, feeds her child. “You are repulsive,” the child tells the mom. “Do you know how this happened?” asks the mother. “You were an infant when our house was on fire. Everyone ran away, including your dad. I picked you up, covered you completely and got burnt.”
No wonder, Kahlil Gibran wrote: Beauty is not in the face; beauty is a light in the heart.
Having said that, I should concede I enjoyed the compliments from friends. Include me in the hypocrites list.
Posted by R. Ramesh at 11:03 AM 32 comments: 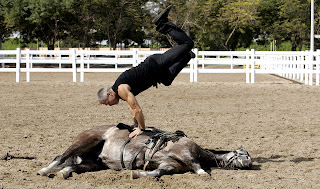 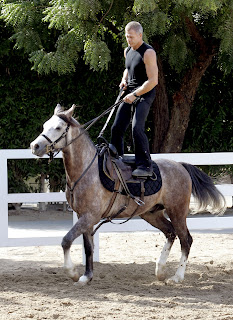 (This is a report I wrote for our newspaper today)
From a humble soldier in Hungary to horse-stuntman in the UAE, Sandor Boros has galloped a long way. He has been a taxi driver, photographer and stunt performer in Hollywood movies, but it is his passion for all things equestrian that has brought him to Sharjah.
“I am old,” he says, but this 57-year-old man’s feats — performed with his horse Kagylo, an Arabian breed from Hungary — can easily match those performed by stuntmen in their thirties.
Even as the horse picks up speed, he stands majestically on it, cracking his whip loudly. He then rolls head-over-heels swiftly and makes the horse follow commands like ‘Lie down,’ ‘Sit’ and ‘Spin over.’
Boros has trained Kagylo to stand still at a particular place, tolerate loud noises/fire and even act dead, while he pulls its tail or walks over it. Standing on two simultaneously running horses has drawn much applause for him.
While transporting Kagylo by plane from Hungary to the UAE, the stuntman also arranged for a special saddle made exclusively for stunts where he needed to have a firm grip. At Dhs35,000, the saddle was “too expensive,” but he had little choice as “recession was biting Europe and there were not many jobs forthcoming.”
After ending his career as a soldier, Sandor turned a taxi driver only to find the everyday routine in a car boring. “It was then that I sought help from a friend to train as a stunt man and my life changed. I now have four decades of experience in sport and stunt photography too,” he points out.
Prior to taking up work three months ago as a horse trainer and stable manager at the Sharjah Equestrian Club, Sandor had a stint in Dubai working for the show, Al Saheel:  A Thousand and One Horse Tales.
The show invited people from across the globe to tell their stories through their horses. Dramatic and funny, these were tales of man’s relationship with his horse and the continuity that has bound them together through the centuries. The different sections included classical Spanish dressage, stunt riding, pony humour, traditional “horse whispering,” plus specialist acts. The show was designed to attract those with no prior knowledge of horses as well as enthusiasts.
“Using my own specially trained horse, we performed two of these acts. One was comedy and the other to show the athletic skills of the horse and rider (trick riding),” explains Sandor.
There have been funny moments too. At a particular show, the horse that acted dead refused to wake up. After Sandor’s repeated prodding failed, he urged the audience for an applause. Within seconds, Kagylo was on its heels.
Adaptability has not proved to be a problem for the Arabian horse. “During winter, these horses grow longer hair offering a cosy coating. Summer too did not prove tough for my horse.”
Fluent in Hungarian, German, Italian and English, Boros has been a stunt performer in over 100 Hollywood films, some involving leading stars such as Arnold Schwarzenegger, Daniel Craig, Sylvester Stallone and Bruce Willis. He also took part in the famous Apassionata horse show, which performs annually across Europe in 22 major cities.
The stunt master has clearly fallen in love with Sharjah. “This is a great city. The cultural diversity of the UAE is appealing. So I am here offering funny, stunt and trick riding horse shows for occasions like opening ceremonies, desert camps, birthday or wedding parties, school and company events.” What are his future plans?“I intend to start a stunt school in Sharjah,” he replies, even as the horse neighs. “See, Kagylo is saying it is a good idea.”
Posted by R. Ramesh at 4:19 PM 18 comments:

My friends are your friends

On this 500th post, I wish all visitors of this blog, the best of life – health, love, cheers, peace and prosperity. Plz remember, you have a friend who remembers you 24/7. His name is RR.
Posted by R. Ramesh at 5:45 PM 30 comments: