My friend is your friend-1 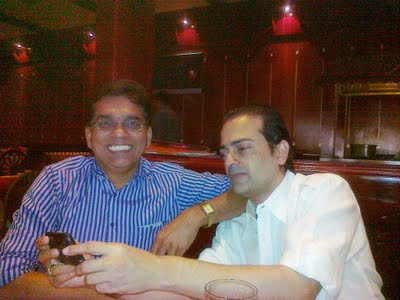 It’s always a pleasure to catch up with a dear friend, and that too after years. Saisuresh Sivaswamy is a popular name in journalistic circles and he is now Editorial Director of Rediff.com. Hard working, humble, great sense of humour…hey, he has many plus points buddy. Sai is on a visit to Dubai from Mumbai and we had Kerala-style lunch yesterday. Awesome pal Viju Jacob was also with us. We enjoyed the lunch but we missed you guys and gals. Where the heck were you all?
Posted by R. Ramesh at 6:09 PM 17 comments:

The friend came close and did what I dislike most –Yawn – with his mouth wide open like a hippopotamus.
Seeing my discomfort, he said, “I did not sleep well last night.”
“If you open your mouth too wide, you can dislocate your jaw joint. Normally, you should be able to insert three fingers between your front teeth,” I scared him.
Other friends joined in.
“Honeybees never sleep. Why you complain?” joked one.
“But a snail can sleep for three years,” he shot back.
“The 24-hour accessibility of the Internet has created havoc. My daughter goes to bed after midnight,” lamented a female colleague.
“What is the record for longest period without sleep?” asked one.
“I think 18 days. But I had read that the record holder reported hallucinations and blurred vision,” said a self-proclaimed genius.
“Why this discussion on sleep? I feel sleepy,” complained an irritated friend.
“It all started with the yawn of this guy,” I told them, myself yawning.
Posted by R. Ramesh at 7:36 PM 15 comments:

When I started my career in a small newspaper in Mumbai, I used to stare at the gigantic Times of India building and ask my friend, “When will we land here?”

Land I did in just a year and spent 17 years in that organization, when I realized I could not afford to buy an apartment in the expensive city. We started off with kerosene stoves and one room apartments –No gas cylinder, first class travel, car or AC.
“Go to Gulf,” advised my senior colleague.
“Earn Rs300,000 and return in three years. Buy a house and settle down,” advised my dad. I agreed. I saved Rs300,000 in a couple of years, but the house rates had reached 1 million. I pursued and raised that amount. But the apartment rates had reached 4 million. The school and college fees thumped a big hole in pockets.
Fortunately, perseverance paid and we have now booked a small apartment in Chennai.
“Shall we retire?” I asked my wife.
“You promised to show me at least one other country,” grumbled my wife. “Dad, our college has warned that the fee has to be paid before this month,” warned my daughter.
“Bro, you agreed to visit Switzerland,” said my adopted sister on telephone.
I reached office.
“Boss, is there scope for overtime?
The fun is I am enjoying the moment and challenges.
Posted by R. Ramesh at 1:34 PM 27 comments:

No pill, take the bill

There are good and bad doctors. I had a taste of both on a single day.
My daughter, influenced by peer group, decided to go for braces to set her tooth in line. A dentist examined her and suggested it would be a waste of effort. She patiently explained to the girl the advantages and disadvantages. After 15 minutes, I asked her about the fee. She politely said, “No need.”
My daughter had also complained of a corn (hard skin) on her foot.
So we moved to another hospital in Rolla, Sharjah.
At the entrance, we were told to pay Dhs210 ($57). An eager doctor took us to a cabin. After a casual examination, he listed suggestions.
“Throw away her present shoes and slippers. Go for Nike or Reebok.”
Surmising what was going on in my mind, he quickly said: “No, not roadside duplicates. Only originals.”
He then named a brand shop. “Go there and buy Mango-butter solution.”
While I was assessing the damage to my purse, he continued: “Buy 15 pairs of white socks. Wash legs with salt water. Maybe, use Vaseline.”
Before we could ask more questions or wait for treatment, he screamed, “Next patient.”
For the money we paid, we could have bought all the items.
We felt so cheated.
Posted by R. Ramesh at 8:44 PM 25 comments:

“I remembered you yesterday,” she said.
“That’s nice,” I replied, obviously delighted.
“I was at Al Ain Zoo,” she shot back, diluting the joy.
It has happened to me quite a few times.
“I dreamt of you yesterday,” said a pretty colleague at my former newspaper office.
I hid my joy and acted as if I was not enamoured. The next day I tried to show off, narrating the girl’s comment to my boss.
“Oh, she said that to you?” he reacted with a sad face. “Just three days ago she said the same thing to me.”
Talking of colleagues, I had an interesting one who slept while on duty and also argued a lot.
“Wake him up,” said my boss once.
“Better not,” replied another colleague. “That’s the only time he doesn’t argue.”
Some colleagues can be real fun. One shared this joke:
A fool took out his torchlight on a dark night, pointed at the sky and told his friend, “Reach the sky by holding on to the light.”
“I will not do that,” answered his partner. “Halfway through you will switch off the light and I will fall.”
Posted by R. Ramesh at 7:37 PM 29 comments:

Life is a tale told by an idiot ‑ full of sound and fury, signifying nothing, according to Shakespeare.

However, Tamil poet Avvaiyar, saw life differently. Asked what is rare in life, she replied, “Rare it is to be born a human. Rarer it is to be born without disabilities - like blind or deaf. Even if one attains human birth without disabilities, it is rarer to be born with knowledge and wisdom. If s/he has these two also, it’s very rare to have a heart for charity and penance. These two traits open the gates of heaven.”
When my brother’s family was going through a tough time, I told his son, “Life’s a battle zone. Keep fighting with a smile. Let the driver (God, truth, whatever) run the vehicle. After all, the destination is fixed.” Thankfully, he managed well so far.
I feel life is just like a boat drifting along where the wind takes it.
No wonder, when a thinker was asked whether he believed in destiny or free will, he replied, “Of course, free will. I am destined to say so.”
Posted by R. Ramesh at 6:57 PM 24 comments:

My friend AKV looked sheepishly around, convinced himself that his wife was not around, and told me in a whispering tone, “My wife knows I am a confirmed flirt.”
Most people are. He was just being honest.
Hey, don’t give me that look. I am innocent. I don't even know the meaning of that word.
According to a study, 35% of people using personal ads for dating are already married!
Has the society changed?
I don’t know. You tell me.
But I can share a joke.
Tommy asked his granddad, “How to patav (attract) that girl?”
“Give her nice gifts. Even a beautiful rose will do,” said the old man trying to please the GenNext.
The boy rushed off cheerfully. The next week, Tommy returned to the old man and said: “Now tell me. How do I get rid of her?”
Posted by R. Ramesh at 10:15 AM 24 comments: