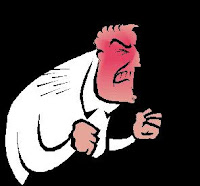 My friend was furious.
“I will teach him a lesson. I will bash him up,” he kept repeating.
To console him, I narrated a story.
An elephant took a bath in a pond and started walking on the road. A dog that had completely dirtied itself with filth crossed the elephant’s path. The tusker politely moved aside. The dog laughed at it saying, “You are so big, but scared of me.” The elephant replied, “I can crush you in a second. But I do not want to dirty my legs.”
I told my friend, “Be like that elephant. Do not dirty yourself.”
He was not convinced.
“No one can stop me. It is impossible. I will bash him up.”
The word “impossible” reminded me of a joke.
One guy told his friend, “The word ‘impossible’ does not exist in my dictionary.”
“You should have checked the dictionary properly before you bought it,” came the reply.
Thankfully, the joke calmed my friend, at least for the moment.
Posted by R. Ramesh at 9:04 PM