'Fight against hunger' to begin in Dubai

Here is a report on World Food Program I wrote for my newspaper today: Sorry about the length. 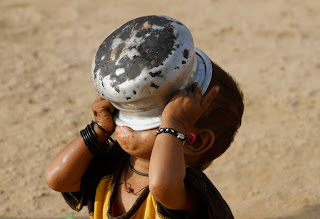 will be the launch pad for a GCC-wide fund-raising campaign against global hunger to be launched from Nov.1 by the UN World Food Programme (WFP).

Stating this in an exclusive interview with The Gulf Today, WFP’s Regional Director Dr Daly Belgasmi cautioned that the fund situation for projects to fight hunger world-wide was alarming.

“This is where generous countries like the UAE offer hope,” he said.

Started as a temporary contingency base for humanitarian emergency in 2001, the centre is now a bustling logistic hub for the agency.

A new spectrum of food crisis looms with over a billion going to bed hungry every night worldwide. While the budget earmarked for 2010 was $6.7 billion, the WFP could receive only half the amount so far.

The WFP says that the global food aid deliveries of 5.7 million tonnes in 2009 were the lowest since 1961; programme food aid declined by 25 per cent, emergency food aid by 12 per cent and project food aid by six per cent.

“The prices of commodities such as wheat have shot up. ’s decision to ban export of wheat till 2011-end because of drought has also compounded the problem,” Belgasmy noted.

The situation forced the WFP to cut rations, thereby affecting calorie intake of the beneficiaries. In the occupied Palestinian territories, for example, the calorie levels were below the minimum prescribed, falling from 2,100 to 700.

According to Belgasmi, the ‘Fight Against Hunger’ campaign is being launched in the UAE in partnership with various industry leaders.

Each partner is expected to provide unique “interactive” and “relationship” marketing expertise to generate cash for the programme.

“In line with WFP’s strategic objectives for the region to raise both awareness for WFP’s humanitarian activities and developmental initiatives, as well as local funds, we will be launching mass fund-raising campaigns throughout the year,” stated Belgasmy.

“The aim is to reach the maximum number of the general public, criss-crossing the population wherever they exist, hitting two birds with one stone, branding as well as reach,” he added.

The WFP argues that 3Fs — fuel, finance and food crisis — have hit the poor worst.

“Due to this, the calorie intake is less, malnutrition high and the most vulnerable are children and pregnant women,” Belgasmy noted.

Most WFP activities in the UAE are actively supported and partnered by the Red Crescent Authority (RCA).

Sheikh Hamdan Bin Zayed Al Nahyan, Chairman of the UAE RCA, had earlier stated that the initiatives adopted by the UAE aim at securing food to those who need it and provide all means of living to millions of peoples who experience severe hunger and its tragic consequences.

Hailing UAE’s role in fighting hunger, Belgasmy said that the RCA’s constructive partnerships with WFP had made remarkable difference in the standard of services to victims of poverty and hunger worldwide.

The WFP and RCA officials insist that the current humanitarian challenges require broader international cooperation and activation of partnership among international community institutions and organisations and active forces to deliver food, which is a basic right to every individual.