Damn spam: Not naughty at 65

When M. Adnan received a mail stating that he had a won a free trip to London, he was thrilled. He rang up the phone number mentioned and was informed of “procedures,” including payment of some fee. It was then that he realised it was a spam mail.

Many friends have had similar experiences. “Easy loan offers bug me,” complained one.
“You are lucky winner of a random draw,” is a common method of cheating.
I myself was at the receiving end this week. Someone hacked my G-mail and sent a “games” spam to my contacts.
The first one to alert me was blog friend Vinisha of Mumbai.
I rushed a “Ignore spam mail” request to my contacts.
Interestingly, my mail brought me back a couple of dear friends with whom I was not in touch for some time.
“This time it's ok. But, from next time I'm gonna charge you AED 100 per spam mail,” joked Mahsoom.
“Yeah, i got it. thought what devil got into yr head to send such mail. :)) how are you?” wrote Eppie, my Sri Lankan blog friend.
RK is furious. At 65, he hates getting Viagra spam ads.
Posted by R. Ramesh at 10:49 AM 25 comments:

Famous blogger/friend Rachna has done something interesting to help everyone. I am happy to share it here and hope all visitors get the benefit.
In her own words:
I have started this initiative, Rolodexo.com. It is a simple concept that allows a person to create a virtual business card that looks exactly like a physical business card free of cost.
The idea is to help every self-employed person, professional, housewife and student get a unique identity by creating own Biz Card. They can share this card via email, embed on blogs/websites, use on their resumes and even attach as signatures on Gmail or Outlook.
Very soon there will be an Android App for those wishing to share this card through cellphones. No paper, no physical card, environment friendly and absolutely free. Try it today, and let us spread the word for the benefit of common people.
The website URL is
http://rolodexo.com
This is the FB page of the Application
https://www.facebook.com/pages/Rolodexocom/235758923168750?ref=ts
Posted by R. Ramesh at 7:01 PM 19 comments:

How different parents are!
A generally bright student scored a little less at a class test in a Dubai school. As is the practice, the teacher asked the girl to get her parent’s signature.
The girl returned the sheet the next day. The teacher was shocked to see a comment “very poor performance” written by the dad.
After another test, the same girl was asked about the signature from the dad.
“Don’t ask me, ma’am,” came the reply.
“What happened?”
“He just tore the paper to pieces.” With these words, the girl started crying and the teacher had to pacify her.
What a discouraging dad!
The other extreme is this mom.
“Oh, my son. He tops the class always, but he is so naughty.”
“Good boy,” I hugged him.
The monkey who tops class did not smile. Instead, he took out a toy pistol and pressed the trigger. My face was covered with coloured water.
I thought the mom would admonish the child, but she slapped a kiss on his cheek, saying, “Don’t do that to uncle. Say sorry.”
Sorry? The monster was already punching me.
Two blunders of this mom: 1. Condoning the monkey’s mischief. 2. Calling me “Uncle.”
Damn it.
Posted by R. Ramesh at 10:15 AM 20 comments:

My new colleague Adnan Mehmood has designed a new header for our blog. Hope you guys/gals like it.
Posted by R. Ramesh at 5:35 PM 18 comments: 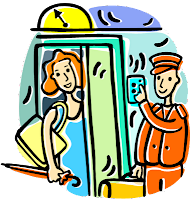 I just returned after a leisurely walk when our watchman started chatting near the elevator.
A young man passed by. In shorts and T-shirt with arms tattooed, he looked handsome.
“Can you fix the tap?” he asked the watchman.
“I will be there in an hour,” replied the watchman.
After he left, I told the guard that the man looked smart.
“Useless guy,” came the reply. “His wife works hard and earns. This fellow just eats and sleeps, claiming to be a businessman.”
After two minutes, I noticed a sad-looking man entering the lift.
“His is a sad story. His brother died yesterday in hospital of heart attack. This man has come from India for the last rites.”
I was turning gloomy, when another elevator gate opened.
“Good morning,” said a cheerful face. The short Filipina, face covered in make-up, winked at the guard. She disappeared before I could pick my comb from the pocket.
“Enough,” I told the guard and stepped into the lift.
Another man with a Bangladeshi look entered. I reached my third floor apartment. He followed me and opened the next door. We have been neighbours for a year, but have never talked.
Anyway, I have to rush now and chat with my blog friend in Canada. I just love her.
Posted by R. Ramesh at 3:55 PM 26 comments: 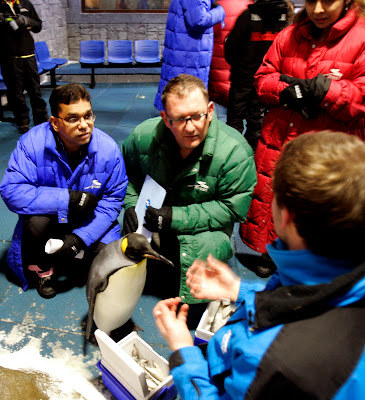 (This is a report I wrote for our newspaper)
Amid the cold spell comes the hot news: a 20-strong group of snow penguins have arrived and settled in their new home at Ski Dubai, officially.
In a first-of-its-kind interactive experience in the Middle East, the naughty, soccer-loving Gentoo and King snow penguins were introduced to the media by Ski Dubai officials on Tuesday.
Hugged by trainers and wading through flashing cameras, the winged guests were at their humorous best.
One penguin pecked and pushed a camera that came too close for comfort as it hugged a female British trainer. “He is so shy and possessive,” the trainer laughed.
Another nudged a companion as mischievously as a human would do, before slyly pushing off.
Raised in the care of humans, the snow penguins are part of a multi-generation breeding programme and have been brought to the UAE from SeaWorld in the United States.
As the penguins are used to cold fish for food, special varieties are imported from Canada.
Ski Dubai officials say that they will allow visitors to make their own “Peng-Friends,” through a one-on-one encounter with these birds from Feb.5.
“The programme will let guests meet the snow penguins and spend time directly interacting with them in an environment that has been specially-created at Ski Dubai to replicate their natural Antarctic habitat,” explained Omar El Banna, marketing and sales director, Majid Al Futtaim Leisure & Entertainment.
All “encounters” will be guided by professional snow penguin trainers, and include face-time with the snow penguins, underwater viewing, access to their splash pool and the opportunity to take pictures with their “Peng-Friend.”
“This experience will be open to guests, starting from three years of age. Additionally, Ski Dubai snow park visitors can witness a daily ‘March of the Penguins’ free of charge,” revealed Omar.
Families will be able to view the birds travel across the Ski Dubai snow park as they navigate the sub-zero conditions and enjoy their surroundings as part of a physical and mental enrichment programme.
Penguins are aquatic, flightless birds living almost exclusively in the southern hemisphere, especially in Antarctica. Most penguins feed on krill, fish, squid and other forms of sealife. Many species are also found in the temperate zone.
“The primary idea is to raise awareness about these wonderful creatures and the conservation efforts required to sustain their natural habitat,” noted Omar.
He pointed out that these snow penguins have been hatched and raised in the care of humans as part of one of the world’s respected breeding programmes in the US.
Interacting with penguins offers an emotionally enriching experience. “They are very much like humans. Once they are comfortable, they even sit on your lap,” Omar added.
Asked about the safety aspects, he insisted that it was top priority. “During all encounters, two trainers would be provided. We will tell guests what they should do and what not. After all, these are gentle creatures and should be treated with love and care.” When asked what sort of dangers penguins faced out in the wild, a trainer responded: “Marine pollution and oil spills have claimed thousands of penguins.” He quickly added: “Thankfully, here these penguins will be safe.”
Posted by R. Ramesh at 6:47 PM 17 comments: