Maid for each other 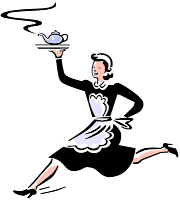 I never knew that genuine appreciation could sometimes create problems.
A rich family in Mumbai had a housemaid whose daughter was studying in college. The head of the family was repeatedly showering praise on the girl in front of his son. One day, it happened. The son and the maid’s daughter went missing. I do not have to reveal the rest of the story. The couple is now well settled with children. And they have a maid to help their children.
While repeated praise can create such levelling issues in family, do not be surprised if people craving for admiration make crazy demands.
A bodybuilder bent an iron rod with ease at a circus. There was a loud applause from the audience. After the show, a man approached him and asked, “If I pay double, would you join me on a mission?” The bodybuilder agreed. The man took the bodybuilder to a closed shop at night and said, “Break the window bar.” The bodybuilder replied, “I can do it. But you have to clap once I finish.”
Talking about surprise, I remember reading about Austrian philosopher Ludwig Wittgenstein who once remarked, “When I came home I expected a surprise, but there was no surprise. So, I was surprised.”
Posted by R. Ramesh at 7:20 PM