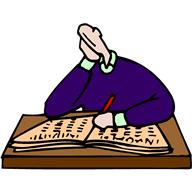 I switched on the computer, typed some words on Google search and a deadly headline flashed across: “Study proves boredom can lead to death.”
As reported in the Wall Street Journal, “Researchers have discovered that boredom can be fatal. Boredom has serious consequences for health and productivity,” the report mentioned.
Scared, I shut the computer.
The only way to beat boredom is to be active, I told myself.
First, I needed coffee.
I lit up the gas stove and mounted a milk pot. My mobile buzzed.
“Would you like to upgrade your bank facilities?” a sweet voice posed an unexciting question.
“No.”
She would not leave. After three minutes, I banged the phone, but the milk had spilled.
What more pleasure than taking a shower and humming all the way, I told myself.
Hardly had I applied soap all over, the doorbell rang.
It was the laundry boy.
The room had become all wet and I escaped slipping on the floor.
When I was wondering what next to beat boredom, the phone buzzed again.
This time it was my wife.
Then began our heated argument.
Several minutes later, I realised I had killed boredom, thanks to my wife.
Posted by R. Ramesh at 11:02 AM