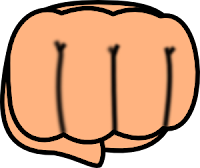 There were others too who were shocked and reacted instantly.
“Spot on. If it was boxing, they would have stopped the bout,” wrote PK Madhavan.
“These are the brave men who defeated the Nazis. Now they can't even defend their own houses and citizens against an angry mob. Poor Brittania,” wrote Rik Corijn.
“We have a history of being ruled,” was Ajit Kumar’s angry response.
Viju Jacob did not let the subject boil and broke his silence.

“I was talking about cricket where England is hammering the Indians,” he declared.
Posted by R. Ramesh at 1:08 PM