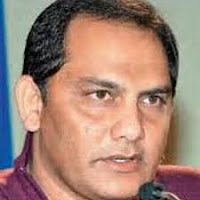 SHARJAH: Mohammed Azharuddin, a former international cricketer who represented and captained the Indian cricket team, took to Twitter to deny reports in a section of the Indian media that he had “got married for a third time.”
The news of the third marriage quickly spread on the social media prompting a couple of Azharuddin fans in the UAE to call this newspaper to verify whether it was true.
“News about my 3rd marriage is incorrect and false. Please check facts before publishing,” the cricket veteran tweeted on Sunday.
Media reports had indicated that 52-year-old Azharuddin, a veteran of 99 Tests and 334 One Day Internationals for India, had tied the knot with long-time friend Shannon Marie.
The accomplished cricketer who had captained the Indian cricket team for much of the 1990s had first married Naureen, with whom he had two sons, Asad and Ayaz, and whom he divorced after nine years of marriage.
He then married model-actor Sangeeta Bijlani in 1996. The couple separated in 2010.
On Sept.16, 2011, his son Ayazuddin, 19, died in a road accident.
Azhar’s fans were visibly upset at the incorrect news.
“Sir good you gave a timely clarification,” wrote one, while another suggested, “Sir pls take action against them.” Another angry fan mentioned, “This then is really too much.”