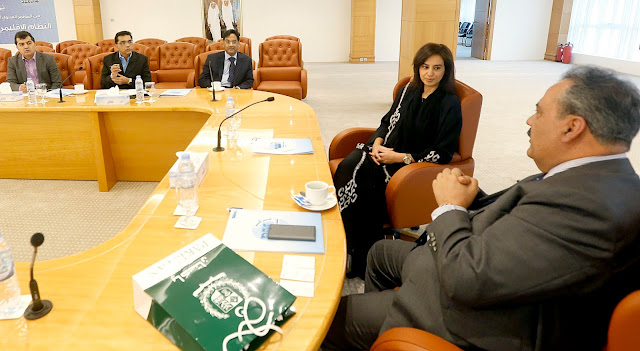 
(My article in The Gulf Today)


SHARJAH: Hailing UAE-Pakistan relations as “historic,” Pakistan’s Ambassador to the UAE, Asif Ali Khan Durrani, has stated that increasing bilateral trade volumes and deep-rooted cultural and social bonds have pushed the relations to a much higher strategic level.


On a special visit to the Dar Al Khaleej office where he met Editor in Chief of The Gulf Today, Aysha Taryam, and her editorial colleagues, the ambassador, who had earlier served in various missions of Pakistan abroad including New Delhi, Tehran, New York, Kabul and London, stated that the 1.3 million Pakistanis living in the UAE consider the country their second home.


He noted that the UAE is currently Pakistan’s largest trading partner in the GCC, with bilateral trade reaching $9 billion, accounting for almost half of the $19 billion traded between all GCC countries and Pakistan. “There is also enormous potential to increase this volume.” Pakistan, the envoy observed, was the first country to accord formal recognition to UAE on its achieving independence.


On a lighter side, he added that many of his Emirati friends spoke fluent Urdu and also Pashto language.


The Pakistan ambassador made a special mention about the Gwadar Port project stating that it could be a “game changer” offering wide economic opportunities to the entire region, including the UAE.


It is a gateway to the China-Pakistan economic corridor and strategically located near the Strait of Hormuz. It provides the closest access for Middle East oil and gas to Western China. “Gwadar is becoming an attractive investment here. It will initially focus on 13 economic zones, to be followed in all 23 zones. The energy needs of the country are growing at the rate of 12 per cent and so priority will be given to energy projects to be followed by gas,” Asif Durrani elaborated.


He insisted that the Gwadar project will help save significant shipment time and billions of dollars in freight saving.


The ambassador also heaped praise on the UAE leadership for standing by Pakistan at all times of need.


Talking specifically about the polio campaign in Pakistan, the envoy pointed out that polio cases came down 85 per cent.


“We were polio-free until Taliban forced a ban in Afghanistan and the problem spilled out. The government has now overcome the issue and for the past one year, no polio worker has been harmed anywhere in the country. The campaign has been successful and our special thanks to the UAE for all the support on this front.” Over 20 million children in Pakistan have already been inoculated against polio as part of the Emirates Polio Campaign.


The ambassador conceded that school seat admission for Pak expatriates was a challenge, but said the problem was being addressed by the community members.


“We have community schools and the fees are nominal as they cater to economically weaker sections. We have seven such schools here. We have to follow the rules when it comes to the number of seats in a class. The demand is high but we are trying to find alternative ways to handle the issue,” he explained.


On voting rights for Pakistani expatriates in the UAE, he observed that the subject was being debated and it was up to the parliament to take a decision on the subject.


“The ball is in the court of leaders,” he said, adding, “We also have to take into consideration various logistical issues like polling stations, polling officers, electronic voting machines. In principle, everyone agrees, but the decision has to come from the leaders.”


“There are already 150 flights per week between the two countries and that reflects the strength of the relationship.