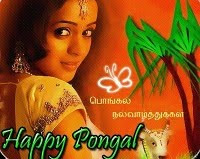 Here’s wishing Tamilians, global Indians and global citizens a happy Pongal.
Thai Pongal (Tamil: தைப்பொங்கல்) is a harvest festival equivalent to a thanksgiving event celebrated by Tamils across the world. Pongal in Tamil means "boiling over or spill over." The act of boiling over of milk in the clay pot is considered to denote future prosperity for the family. In January 2008, the Tamilnadu Government anounced that Pongal will be celebrated as 'Tamil New Year' from 2009.
(Thanks: Wikipedia)
Have a great New Year, folks.
Posted by R. Ramesh at 6:10 PM