Painter who ran in fear 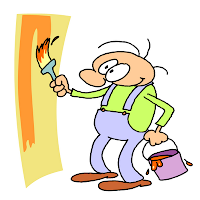 My room in Sharjah has just been whitewashed by the builder.
I remembered a painter in our building in Mumbai. The dark guy mostly appeared coated in colour paints with only his eyes visible. My daughter would run and hide in fear seeing him.
This guy had four daughters and was not giving up. He wanted a son and worked hard for that. At last he was blessed with one. When my second daughter was born, he told me: “Don’t give up.”
“No thanks. Hum doh, hamara doh, (We two, ours two),” I replied.
Once we asked that painter to whitewash my house. He kept his material at my house and went for tea. The inquisitive monkey brain of mine suggested that I should try my hand.
I opened the kits and started brushing the walls even before they had been scratched. Within minutes, the place was in a mess. Paint splashed on my hands, face, hair and floor.
I heard the doorbell. My wife returned with some vegetables.
“Whaoooooo?” she screamed.
The painter was stepping in behind her.
He saw me and this time it was his turn to run in fear.
Posted by R. Ramesh at 12:00 PM